How to stop windows 10 from automatically installing

Windows 10 - you either love it or hate it
Author: Ian Roberts

Microsoft released Windows 10 in July 2015, but not everyone has taken a shine to it. It is the latest Operating system from the software giants as a bit of a rush job to quickly eliminate windows 8 from the radar I feel. Microsoft have learned that people don't have to choose just Windows as their operating system now - there are others that people can, and DO choose. Windows 8 was really an operating system that Microsoft liked, and not necessarily what the general public liked. But what did they expect when they just didn't do their research? The mentality back in 2012 was a bit different to today, having had a bit of a shuffle with Management. They realise that in order to keep people loyal, they have to give people what they ask for because they can now purchase elsewhere. But, they didn't just release something altogether new - they THREW it as us for free. Some would say that's really nice of them and they took that operating system as if it were free burgers at an Anti-Slimming world convention, others just don't like things being forced down their neck (unless it's those burgers or Jack Daniels). People don't like change, because we have to learn something new again. We don't have time for that!

To date, Microsoft have given away over 300m Windows 10. All of these are downloaded as part of your Windows 7 or 8 updates. Then, a check to see if your PC or Laptop was compatible with Windows 10 - and then informed you that Windows was ready to upgrade. You could easily just dismiss it but now, Microsoft have pulled a fast one and if you click on the X in the top right - it installs Windows 10 anyway! Cheeky!

So if you haven't upgraded yet and just don't want to. We have the answer. It's a small program called 'Never10'. You can download from the link on our Free software page.

​Download and run the program. It's very small but effective! The first screen may look like this:

​Click on 'install update'. After the latest windows update file has been installed, open never10 again and this time you should see this screen: 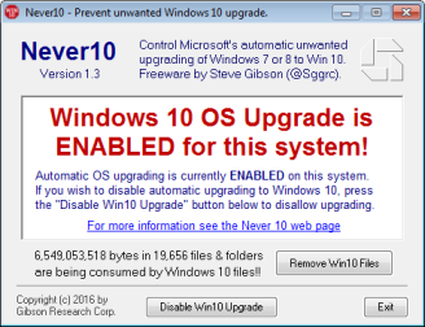 Once you see the box above, you can now disable windows 10 installation by clicking on the 'Remove Win 10 Files' button.

It may display the following screen automatically or you may have to open Never10 again, but either way you should see the following if everything has been successful:
​ 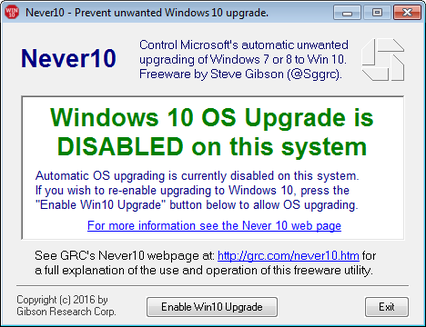 You can now safely exit and forget about it! If you want to install Windows 10 in the future, simply run Never10 again and click 'Enable Win 10 upgrade'.

If you would like to join our new forum, maybe add your field of expertise to it - or ask the forum a question - Join the Onsite Computers forum
​